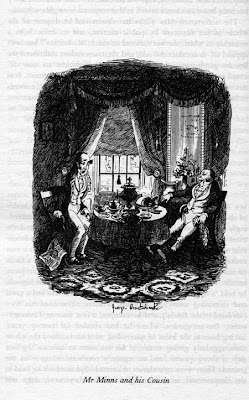 "A Dinner at Poplar Walk" was the first published work of Charles Dickens. It appeared in the Monthly Magazine on December 1st, 1833. It was later included in Sketches by Boz, with the new title that Dickens later gave it: "Mr. Minns and His Cousin". The editors of the Delphi Classics edition of The Complete Works of Charles Dickens decided to open the collection with "A Dinner at Poplar Walk", even though it is included again in Sketches by Boz, with its new title because it marked the beginning of Dickens's career as a storyteller. They add a moving account by Dickens himself explaining his feelings when his story was published:

"... my first copy of the Magazine in which my first effusion - dropped stealthily one evening at twilight, with fear and trembling, into a dark letter-box, in a dark office, up a dark court in Fleet Street - appeared in all the glory of print; on which memorable occasion - how well I recollect it! - I walked down to Westminster Hall, and turned into it for half-an-hour, because my eyes were so dimmed with joy and pride, that they could not bear the street, and were not fit to be seen there."


What a wonderful piece of comedy! What can you expect when Mr. Augustus Minns, "the most retiring man in the world" is invited to dinner by his boisterous cousin, Mr. Octavius Budden, with the hope that the former would make the latter's son his heir? Nothing out of the ordinary, right? Well, if you add that Mr. Minns hates dogs and children, that Mr Budden has, as already said, a son, and that he brings his own dog to Mr. Minns's house to formally invite him to dinner... comedy is served. Some quotes to open up your appetite:


"There were two classes of created objects which he [Mr. Minns] held in the deepest and most unmingled horror; these were dogs, and children. He was not unamiable, but he could, at any time, have viewed the execution of a dog, or the assassination of an infant, with the liveliest satisfaction."


"And Mr. Octavius Budden departed, leaving his cousing looking forward to his visit on the following Sunday, with the feelings of a penniless poet to the weekly visit of his Scotch landlady."


"By the most extraordinary good fortune, however, a coach was waiting at the Flower-pot, into which Mr. Augustus Minns got, on the solemn assurance of the cad that the vehicle would start in three minutes - that being the very utmost extremity of time it was allowed to wait by Act of Parliament. A quarter of an hour elapsed, and there were no signs of moving. Minns looked at his watch for the sixth time." Thankfully, I should add, this sort of things seem not to be exclusive to Spain...

And the finale: SPOILER ALERT!!!

"It was somewhere about three o'clock in the morning, when Mr. Augustus Minns knocked feebly at the street-door of his lodgings in Tavistock-street, cold, wet, cross, and miserable. He made his will next morning, and his professional man informs us, in that strict confidence in which we inform the public, [isn't this great or what?] that neither the name of Mr. Octavius Budden, nor of Mrs. Amelia Budden, nor of Master Alexander Augustus Budden, appears therein."


"A Dinner at Poplar Walk" was just the beginning...


Posted by Margarita Carretero González at 23:43

Email ThisBlogThis!Share to TwitterShare to FacebookShare to Pinterest
Labels: A Dinner at Poplar Walk/Mr Minns and his Cousin, Charles Dickens's birthday, Delphi Classics, Sketches by Boz

This work is licensed under a Creative Commons Attribution-NoDerivs 3.0 Unported License.

You are visitor number